Dashworks accelerates your Windows 10 migration by up to 65% by putting you in control.

With Dashworks, You Are In Complete Control Of Your Windows 10 Migration! 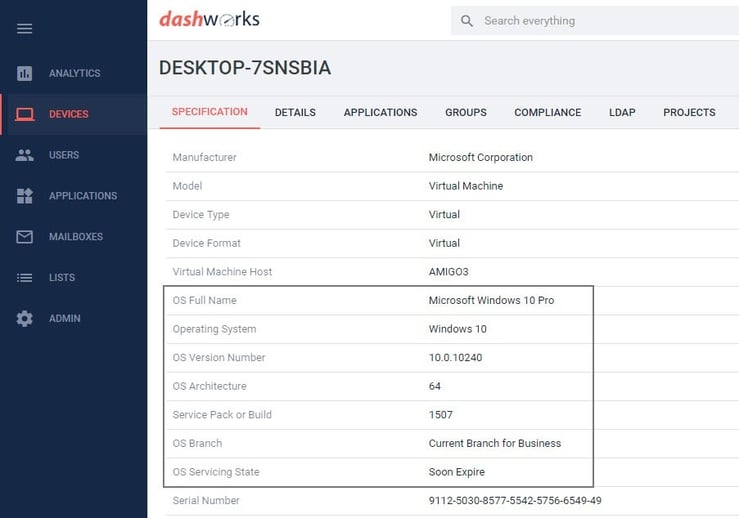 Gartner predicted that by the end of 2018, more than 80% of enterprises will have started their Windows 10 migration — however, adoption has been slower than expected because organizations are procrastinating upgrading to Windows-as-a-Service which comes with two feature updates per year.

Leverage Dashworks' central command and control center, its smart workflows, automated email and self-service capabilities, and so much more to streamline and accelerate your initial migration by up to 65% — and set yourself up for a scalable and repeatable upgrade process right from the start.

By empowering your end users with self-service and automated communication, they become an asset rather than a liability — helping rather than hindering you. All that heavy lifting associated with collecting and validating information is gone.

Automation triggers are taking care of your end-user communications and deployments. Now you can concentrate on what is important. Let the engine do its work while you point it in the right direction.

What Our Customers & Partners Say

Trusted by large enterprises all over the world and major service integrators like Microsoft Consulting, Atos, Wipro, Hewlett-Packard, WWT, and Fujitsu, Juriba's software has readied over 7 million assets for their next generation IT platform, and continues to accelerate IT migrations across the globe.

I was spending all of my time updating and passing around spreadsheets trying to schedule handfuls of users. Trying to keep track of who changed what, and which information was current was impossible. With Dashworks, I had everything I needed in one console, was able to see clearly the applications that were holding up my migrations, and schedule hundreds of users across lots of different countries in the same time. Compared to spreadsheets, Dashworks was a revolution.

Benefits Of Using Dashworks For Your Windows 10 Migration

Migrating to Windows 10, means juggling thousands of dependencies between devices, applications, users, and much more. With Dashworks, your team works in one central command and control platform that is always up-to-date, allowing them to make changes on the fly, kick off T-minus based workflows, and schedule based on user availability and team capacity.

You will most likely send between 6-10 emails per user during your transformation project — resulting in too many emails to keep track of. Thankfully, Dashworks does all the heavy lifting for you by automatically sending and tracking your T-minus based email communication workflow. It supports multiple languages and even delegates.

A successful transformation project requires end user input. But instead of wasting valuable time with floor walkers use Dashworks' self service portal. This way, your end users can volunteer for an earlier migration date, choose from a list of pre-selected devices, validate application usage, suggest applications for retirement, and much more.

Always Connected To Your Live Environment

Our industry-leading, robust data connectors have been used by enterprises, financial institutions, and service integrators around the world to ready more than seven million assets for successful migration. Over the past years, we have seen thousands of different data anomalies, and built Dashworks to handle them.

Make Sense Of Your Applications

While application compatibility is becoming less of an obstacle, you will need to know what you have installed and what is compatible or has an upgrade path is. With Dashworks Analysis+, you can run this analysis in minutes and base your app lifecycle strategy on actionable insights rather than guesstimates.

Accelerate Your Windows 10 Migration Up To 65%!

By mathematically calculating the most favorable scenario, you can determine your path of maximum velocity — e.g., by readying these widely used X apps, you can immediately migrate XX% of your user base. In addition, you make your team more efficient by providing them with the right tooling for the job.

By driving your Windows 10 migration using Dashworks, you can not only prioritize and score big wins early on, but also make your team more productive as they collaborate in real-time, based on actual data — rather than handing around outdated spreadsheets. See who is ready and what is holding you up, immediately. This way, you can identify low-hanging fruit that instantly propels you forward, as well as potential bottlenecks that could set you back.

Speaking of low-hanging fruits and big wins: Because Dashworks empowers users to become part of the project and offers them an outstanding user experience, your co-workers will be excited to support you and collaborate with you. In addition, Dashworks comes with robust data connectors, smart workflows, automatic email capabilities, configurable self-service portals and so much more — all designed to do the heavy lifting for you and eliminate labor-intensive manual tasks wherever possible.

But it doesn't end here. Once you have done all the groundwork for your initial Windows 10 migration, there is no reinventing the wheel for future projects. You can spin up your next update rollout initiative within minutes — whether this is your next Windows feature update, a hardware refresh, an Office 365 Pro Plus application rollout or any other IT Transformation project. This results in significantly fewer resources needed and is therefore less cost-intensive.

What To Make Of The Windows 11 / Sun Valley Rumors

For months, there have been hints. Microsoft watchers like Mary J. Foley, Zac Bowden, and Tom Warren have been talking about an upcoming "big update" for at least twelve months. Now, Microsoft..

The Basics Of Planning Your Enterprise Desktop Migration to Windows 10

While Windows 10 was touted initially as the fastest adopted OS in Microsoft history and Gartner predicted that 80% of enterprises would have completed or at least started their migration by the end..

Schedule a demo to find out how Dashworks can baseline and accelerate your IT Transformation!